succession planning: an answer to the challenge

Home > Resources > Article > succession planning: an answer to the challenge

Jim Collins, in Good to Great, talks about the importance of getting the right people on the bus, sitting in the right seats. Thinking about organization strategically means defining the “seats” in the right numbers at the right level, and ensuring a flow of talent in the future capable of filling those seats.

I wrote about how the record of a leader should include how successful they were in building a team post their departure. Succession planning, like so many things in business, is often paid lip service. People talk about it, without doing anything of any substance. In addition, they will only focus on the “top team”. Who is the successor to the main Board members and senior executives? In my view, this is all too little, too late. It needs to be far more root and branch. It should go deep down the organisation, if the organisation has any chance to grow into the long-term.

Why Succession Planning should be deep and thorough

According to the Corporate Research Forum (CRF), Planning for Succession in Changing Times report, “only 56% of those surveyed said they are satisfied with their organisation’s ability to fill senior positions, and 42% are actively dissatisfied with it.” According to the recent KPMG report Rethinking Human Resources in a Changing World, “Executives see succession planning rising up the HR function’s to-do list over the next three years (20% compared with 18% for the past three years), but only 22% of executives think their HR department ‘excels’ in succession planning.”

Like so many things, this isn’t rocket science (…but if you really want, it can be). It is mostly good old fashioned discipline and management rigour. It takes planning. It is a process. It takes measuring things not typically measured. It also fundamentally means development, and finding ways to develop the employee base. Looking for attributes in the staff that might not be entirely relevant for the role they are currently in. For example, do you hire and promote based on “skills & experience” OR “attributes, aptitude and behaviour”. Taking a skills or experience approach too heavily will result in a fulfilment of the Peter Principle: people will rise to the level of their incompetence. It will solve today’s problem, but not tomorrow’s.

The process should start with a good idea of the attributes, behaviours, experiences and skills (i.e. competencies) that each leader and key role requires. Broadly speaking, attributes & behaviours are innate. They are what you recruit and what needs to be nurtured. Experience and skills take time to develop. They are expensive to recruit for and, I believe, better if they can be grown.

But by systematically understanding and tracking the required competencies, you can see who has them and who is on track to develop them. The image below shows a list of competencies from OrgVue. Like everything in OrgVue, you can make these as complex or simple as you like. You can link them to employees and roles. You can measure and track improvements over time. In other words, you can make operational what is otherwise just a great theory of management. 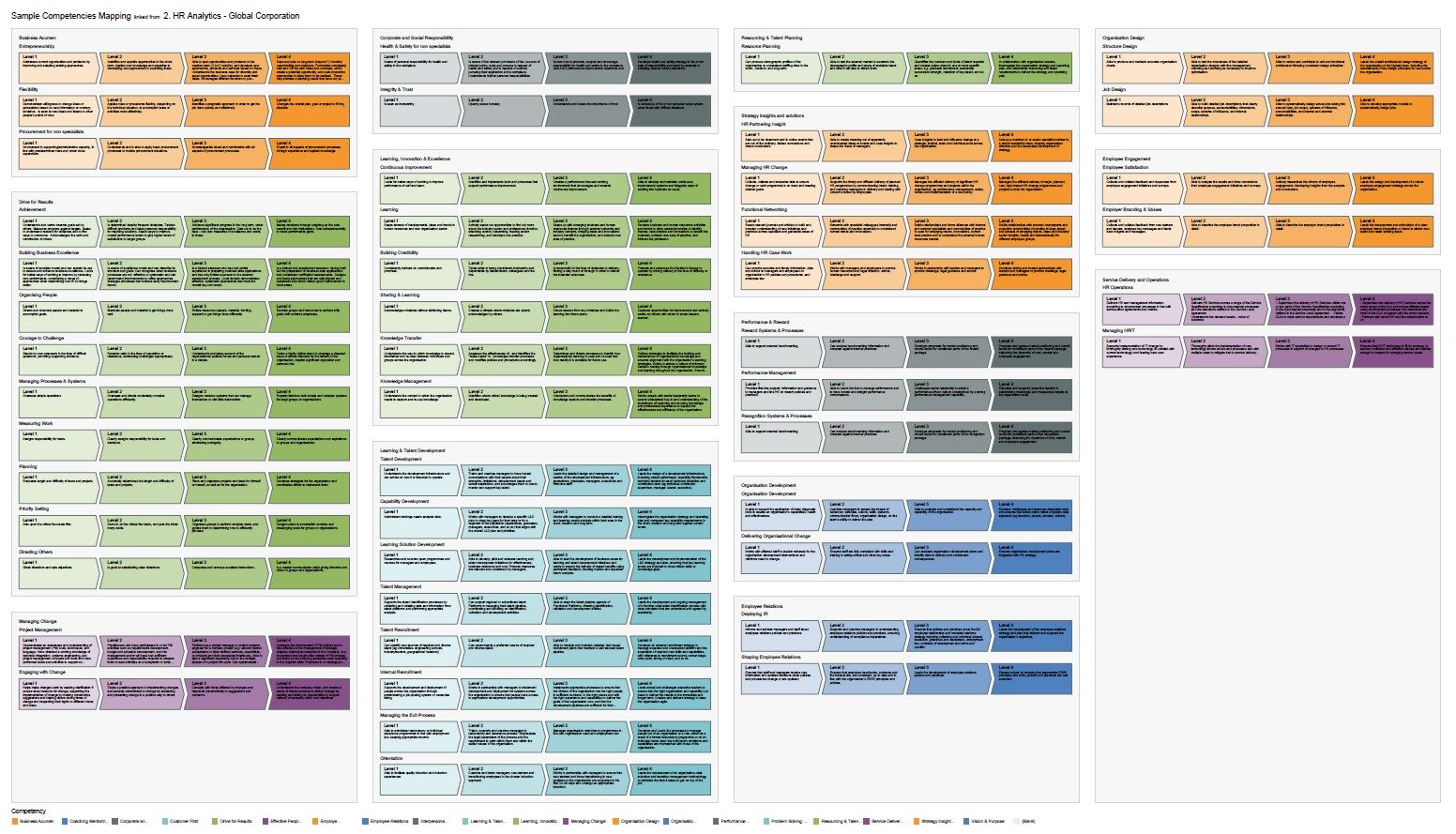 But it isn’t just about competency mapping. Far from it.  In the more immediate term, succession planning should also take a priority and risk based approach. Which roles are hardest to replace? Which are key technical/core knowledge or leadership roles. It’s not just about the senior leaders. Who are the greatest flight risks? Which roles already have a large set of potential successors?

An example of thinking through flight risk is shown in the fishbone diagram below. As an aside, my view is the view of the manager is only one data source, as can be seen below.

Using this risk mapping process, you can see which employees are in what risk and impact categories. In other words, you can narrow down the focus of discussion and action. 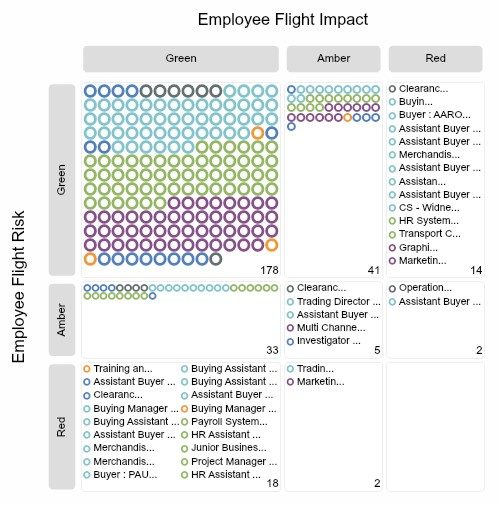 But life isn’t static.  How do you plan far into the future? What if you could predict which groups of employees are most likely to be able to step up into the senior roles? What if there was a body of research, with practical uses that could help plan 5, 10 or even 20 years into the future?

Well, I believe there is.

Ken Shepard from the Global Organization Design Society first introduced me to “stratified systems theory”. The idea, put simply, is that every employee is at a given Stratum. Elliott Jaques defined these levels as corresponding to naturally occurring levels of cognitive capability or complexity of information processing that are a part of human nature, are requisite in the sense of being required by the natural order of things. A simple consequence of this is that lower and higher levels tend to be identifiable in terms of the lower and higher “time span of discretion needed to handle complexity”.

As Ken explained it to me (this is a recollection of the model): you can judge what “Stratum” someone is in by their mental models and framing. This can be shown by how they answer questions such as “What is your view on the legalisation of drugs”, the time horizon in which they look forward, and the type of mental models they hold. Training and experience is required to identify where people are. For instance, a “Stratum I” person would say: “It is bad” whereas those higher up have ever increasing levels of articulation and even “meta-models” for answering the same questions. The table below gives an overview of the stratum levels.

Donald V. Fowke, in his “Thinking About Organization Strategically” mentions that “High potential employees are those who will be capable of general management, or equivalent Stratum IV functional roles, before they are 43 years old. This means they will need to make the turn from front-line manager to manager of managers by 27 years of age.” Around 40% of all employees will only ever be Stratum I, with another 40% in II. Almost no-one, ever, makes it to level VIII. Those are the Steve Jobs or Jack Welch types.

What I like about this model is how practical it can be. Based on where someone is and their age, their future trajectory can be mapped along an arc. This is ultimate long-term workforce and succession planning. Map where employees sit and their age, and you have a very good starter for ten. Think through attrition and the population sizes and form a view as to how much talent could make the cut in 5, 10 or 20 years’ time.

Imagine three people. Person A, B, and C. B has a slightly higher score than A, but is expected to max out at Stratum IV (which is still very senior) while person A is destined to be capable of being becoming a Group VP and possibly even a CEO even though they have roughly the same “score” as person C.

Another interesting thought about this model, is the insight that you should never have anyone manage someone else who is in the same Stratum or more than 1 level away from them. (i.e. if the manager is a III, they should only manage those who are IIs). Equally, each role demands a given level but does not necessarily mean the person in that role is at that level. They could be a II in a III role, therefore won’t perform OR a IV and therefore bored. In either case, it won’t be sustainable.

As is universally true, “All models are wrong, but some are useful”. To follow anything dogmatically is dangerous. But I believe this is a useful framework and process. It isn’t the end answer…It is about mapping out potential, not what will happen. However, there is extremely credible research to back up this method. The Stratum that each employee fits in can be pretty objectively determined by experts and it supports both an As-Is review and this future planning.

Succession planning is be fraught with risk. Does the process open you up to employment tribunals or does it become a de-motivator?  Marshall Goldsmith in his “4 Tips for Efficient Succession Planning” HBR Blog Network said it nicely:

While development plans and succession charts aren’t promises, they are often communicated as such and can lead to frustration if they aren’t realistic. Bottom line, don’t jerk around high performing leaders with unrealistic development expectations. Only give the promise of succession if there is a realistic chance of its happening!

Like all pieces of analysis, more & more complexity and refinement can be added. It is all possible. But remember, each piece of additional “accuracy” in the model means collecting more data; more discussions, effort and time. There always has to be compromise between accuracy and practicality. If anything, start simple – be consistent – and add more insight if the value of that insight clearly outweighs the cost. Most importantly, use the analysis to drive better decision making around developing a workforce and the leadership teams that will drive performance far into the future.

This website stores cookies on your computer which are used to collect information about how you interact with our website and allow us to remember you. We use this information to improve your browsing experience and for analytics about our visitors on this website. To find out more about the cookies we use and how we responsibly manage your personal data please see our Cookie Notice and Privacy Notice.

If you decline, your information won’t be tracked when you visit this website. A single cookie will be used in your browser to remember your preference not to be tracked.